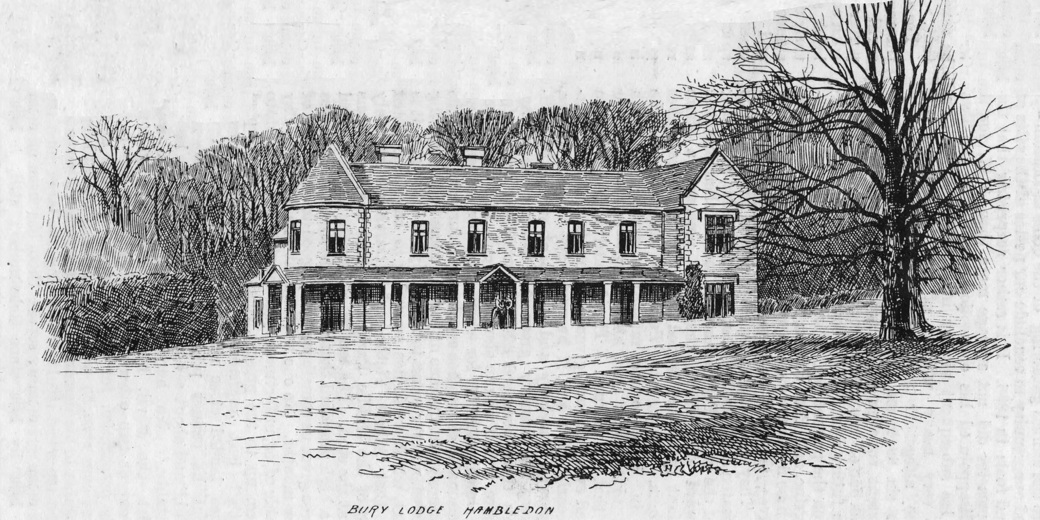 The history of the Butler Family at Bury Lodge in Hambledon began with Thomas Butler (born 1776), who was the son of George Butler (died 1783). They lived in Downe House in Kent which was subsequently purchased by Charles Darwin. Thomas married Hester, and with a young family moved to Hampshire and purchased the original Bury Lodge which had been the hunting Lodge of the Duke Albermarle.
The original house was in such a dilapidated condition Thomas rebuilt the house on its current site between 1802-1806. In all, Thomas and Hester had five children and their son (also Thomas) inherited Bury Lodge on the death of Thomas Snr.
Young Thomas (1798-1885) served in the Coldstream Guards and married Arabella Dacres, who came from a significant naval dynasty of the late 18th century and early 19th century. Her father, James Richard Dacres, served on HMS Barfleur and three actions in which he took part are shown in the black and white engravings that hung on the hall staircase. He was awarded a Lloyds Patriotic Fund sword which was housed in Bury Lodge, until stolen in 2007. Dacres, possibly ignominiously, was the first British Captain to lose his ship to the new United States of America in the war of 1812 (HMS Guerriere v USS Constitution). Many of the Royal Navy artefacts come from this period and the names Dacres has been carried down most subsequent generations of Butler. In addition, it is thought that all of the cabinets, chests of drawers and desks were purchased during this period, as well as items such as the Georgian plate buckets and china.
The house passed successively to Sir Thomas Butler KCVO (1845-1937) and then to his nephew Major General Stephen Butler CB CMG DO (1880-1964). The vast majority of the artefacts for sale were collected by Stephen. This would include all the Africana, such items as knobkerries, shields, spears, wicker baskets and snakeskins, much of which would have been collected during his stints in the Sudan (1910-1914 and 1930-1935), with some from the period when he was Inspector General of the Royal West African Frontier Force (1926-30). Any Arabian items would have been collected during an expedition he made by camel (pre T.E Lawrence and Thesiger) making the first map of the route from Baghdad to Damascus in 1908.
Stephen Butler died in 1964 and Bury Lodge passed to his son Major General Hew Butler (1922-2007). After the death of his wife Joanna in 2017 the house passed to their three children, who sold the house in August 2022 bringing to an end six generations of the family living in the house and subsequently resulting in this sale of furniture, pictures and objects.